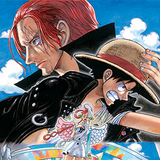 It’s been a big year for Eiichiro Oda’s One Piece series, and it’s about to get even bigger with the upcoming arrival of the 15th big screen adventure, One Piece Film: Red. Crunchyroll and Toei Animation announced plans to distribute the film outside of Japan, with both subtitled and dubbed versions to screen in the United States, Canada, Australia and New Zealand this fall.

Ahead of that, One Piece Film: Red will take center stage at Anime Expo 2022, which is coming to LA over the July 1-4 weekend. Toei Animation plans to hold a series of special events to celebrate the film, including “One Piece Film: Red presents Steve Aoki Live,” an exclusive one-night music event with two-time Grammy-nominated artist Steve Aoki. There will also be a special panel at Anime Expo featuring One Piece Producer Shinji Shimizu, English dub actors Brandon Potter (Shanks) and Ian Sinclair (Brook) and ADR Director Anthony Bowling.

With original creator Eiichiro Oda on board as executive producer, One Piece Film: Red has Goro Taniguchi (One Piece Defeat Him! The Pirate Ganzack! OVA) directing, with a script by One Piece Film: Gold‘s Tsutomu Kuroiwa.

Uta —the most beloved singer in the world. Renowned for concealing her own identity when performing, her voice has come to be described as “otherworldly.” Now, for the first time ever, Uta will reveal herself to the world at a live concert. As the venue fills with all kinds of Uta fans—excited pirates, the Navy watching closely, and the Straw Hats led by Luffy who simply came to enjoy her sonorous performance—the voice that the whole world has been waiting for is about to resound. The story begins with the shocking fact that she is Shanks’ daughter.

Stay tuned for more details on the release plans for One Piece Film: Red as they’re announced!