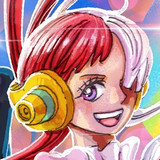 The official website for ONE PIECE FILM RED, the forthcoming 15th feature film in the One Piece anime franchise, has posted the CD jacket illustration for the regular edition of the “Uta no Uta: ONE PIECE FILM RED” CD album, newly drawn by the One Piece manga’s original author Eiichiro Oda, who also serves as the executive producer of the film.

The album, which will be available on August 10, includes seven songs sung by the world’s most popular diva, Uta, whose singing voice is performed by Ado (her character voice is played by Kaori Nazuka). The jacket by Oda depicts a colorful live scene of Uta, with the protagonist Luffy frolicking in the background. In the center, on the other hand, Ado is depicted in a cool, stylish mood, in contrast to Uta’s bright, happy appearance.

Meanwhile, the CD jacket illustration of the album’s first press limited edition was designed by ORIHARA, an illustrator and video creator who also serves as Ado’s image director, and depicts Uta and Ado singing facing each other.

ONE PIECE FILM RED, directed by Goro Taniguchi (Code Geass: Lelouch of the Rebellion), is set to be released in Japan on August 6, 2022.

RELATED: ONE PIECE FILM RED to Hold Its World Premiere Event at Nippon Budokan on July 22