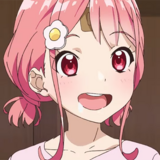 Next month, the girls of comedy anime TEPPEN!!!!!!!!!!!!!!! are bringing more than a dozen exclamation points’ worth of laughs to the summer anime season. To get you warmed up, there’s a new PV available — spotlighting the show’s five comedy trios, as well as both of the show’s theme songs.

The original Bushiroad manga is based on the real-world idol unit Team Y, made up of Milky Holmes voice actresses Mikoi Sasaki, Aimi, and Ayasa Ito. The three also play their fictional counterparts, Young YY, as they aim for comedy greatness.

Check out the latest PV for the upcoming series, and get ready to meet their comedy rivals: Dangan Kunoichi, Celebri-Tea, Akudare Oukoku, and Shinryakusha.

Keep your ears peeled for the series’s themes. Opening theme “Teppen Tennoku ~TOP OF THE LAUGH!!!~” is performed by the show’s 15 leads, credited together as “Teppen All-Stars.” Singer May’n (the singing voice of Sheryl Nome in Macross Frontier) performs the show’s ending theme, “Ahatte Teppen.”