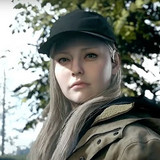 During Capcom’s showcase, the company revealed new DLC for Resident Evil Village. It’s called the Winters’ Expansion and is set to launch on October 28.

It includes a story called Shadows of Rose featuring protagonist Ethan Winters’s daughter, Rose, as she navigates the terrifying powers she was born with. She enters the consciousness of the Megamycete and meets a girl who looks identical to her. She is guided by a voice named Michael who might be able to help remove her powers.

There will also be new orders added to the game’s Mercenaries mode, along with Chris Redfield, Heisenberg, and Lady Dimitrescu being playable characters. Resident Evil Village utilizes the first-person perspective, but now a third-person mode will be included, providing new animations to look at.

Lastly, the game’s multiplayer component, Resident Evil Re:Verse, is set to launch on October 28 as well for PC, PlayStation, Xbox, and Google Stadia.