Dr. STONE Manga Returns With a One-Shot on July 4 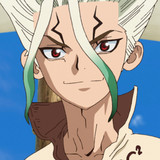 Alongside the reveal that the next Dr. STONE anime will be coming into the port on July 10, the official Twitter account confirmed that the manga will also be getting an extra one-shot chapter in Weekly Shonen Jump issue 31, which is set to be released in stores in Japan on July 4.

More details on the one-shot, including how many pages it’ll be, will be announced in the 30th issue of Weekly Shonen Jump which releases on June 27. Science is a go!

Set sail for the next part of the anime with the Dr. STONE – RYUSUI Anime Special, which releases on July 10 with Crunchyroll streaming the special soon after. The third season of Dr. STONE is also on the blueprints for 2023. Crunchyroll is streaming the first two seasons, describing the series as such:

Several thousand years after a mysterious phenomenon that turns all of humanity to stone, the extraordinarily intelligent, science-driven boy, Senku Ishigami, awakens. Facing a world of stone and the total collapse of civilization, Senku makes up his mind to use science to rebuild the world. Starting with his super strong childhood friend Taiju Oki, who awakened at the same time, they will begin to rebuild civilization from nothing… Depicting two million years of scientific history from the Stone Age to present day, the unprecedented crafting adventure story is about to begin!

Dr. STONE Manga Returns With a One-Shot on July 4