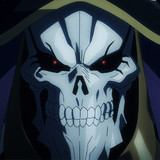 The wait for Overlord IV is nearly over with the series announcing today that the fourth season of the hit anime, inspired by the light novel series by Kugane Maruyama, will be returning to Japanese TV screens on July 5. Along with the premiere date, a brand new trailer was released previewing the opening and ending theme songs by OxT and Mayu Maeshima respectively for the very first time.

The cast return from the first three seasons of Overlord for the fourth TV anime, with the staff from Overlord III returning for Overlord IV at Studio Madhouse. The TV anime series is a continuation of the third season. A film based on the “Holy Kingdom Arc” is also in production.

The third season of the Overlord TV anime premiered in July 2018 and ran until October 2018, with the fourth scheduled to start on July 5 at 10 PM Japan Time. Crunchyroll is currently streaming every TV anime season, describing the show as such:

When a popular MMORPG is scheduled to be shut down permanently, veteran player Momonga refuses to log out. As NPCs begin to develop personalities and minds of their own he decides to put his skills to use as the game’s new overlord.