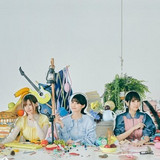 Three-member voice actress unit Earphones, consisting of Marika Kouno (Silence Suzuka in Uma Musume Pretty Derby), Rie Takahashi (Megumin in KONOSUBA), and Yuki Nagaku (Yukana Yame in My First Girlfriend Is a Gal), will live-stream a special program to celebrate their debut’s seventh anniversary, entitled “Earphones 7th Anniversary SP Birthday Party,” from 20:00 (JST) / 04:00 (PT) on June 18. The program will be free, but will not be archived, so don’t miss it!

Earphones was originally formed for the TV anime adaptation of Masumi Asano and Kenjiro Hata’s voice actor-themed four-panel doujin manga Seiyu’s Life! and released their debut single “Mimi no Naka he” in June 2015. Even after the anime ended, they have kept their activities on their own, and have released six CD singles and three original albums.

Their official website writes, “As the title of the program ‘Birthday Party’ suggests, its purpose is to celebrate Earphones’ birthday altogether with the members and their fans who are watching it! With your favorite drinks and snacks, please enjoy the program with the feeling of joining a birthday party♪” In the program, there will be talks related to their seventh anniversary, a section that can only be seen here, and new information.