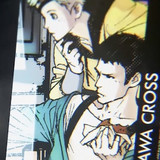 Some new videos recently made their way online to promote Anonymous;Code, the long-awaited new entry in MAGES.’ Science Adventure series. Last month we got to see the game’s opening movie, and now we have a couple new prologue videos and the fifth full promo to explore.

RELATED: Anonymous;Code Shows Off Opening Movie Ahead of Launch

Anonymous;Code hits PlayStation 4 and Nintendo Switch in Japan on July 28, and you can see more of how it’s shaping up in the videos below. First up, the new promo:

The Science Adventure series from MAGES. and Chiyomaru Studio started with Chaos;Head in 2008, and includes Steins;Gate, Robotics;Notes, Chaos;Child, Steins;Gate 0, Occultic;Nine and Robotics;Notes DASH. Anonymous;Code was first announced way back in March 2015.