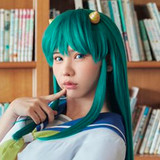 Cosplay chameleon and voice actor Enako, who is known as Japan’s number one cosplayer, has joined forces with manga creator Rumiko Takahashi to bring her characters to life in a photo book to be released in September. Enako will be donning the outfits of 10 of Takahashi’s well-known characters, as well as an original character created by the Inuyasha creator for the cosplay collaboration.

RELATED: Japan’s Top Cosplayer Enako Reveals That She Has Made Over 100 Million Yen in 2021

Ahead of the release, a Twitter account was launched with a tease of Enako dressed as Lum from Urusei Yatsura, which can be seen above. Enako will also wear cosplays from Maison Ikkoku, Ranma 1/2 and Inuyasha.

The Enako and Rumiko Takahashi cosplay collaboration book (currently untitled) is currently up for pre-order for 2,970 yen (US$23) with a planned September 6 release.