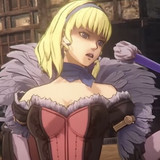 A downloadable demo went live today on Nintendo Switch for Fire Emblem Warriors: Three Hopes, which hits the system later this month. Not satisfied with adventuring alone, the demo brought a new trailer along to assist it in the many battles ahead.

Check out the “Awakened Rivals” trailer below, and look for Three Hopes to launch on June 24.

Here’s how Nintendo describes the demo, which is available on the eShop:

In the demo, you take on the role of a lone mercenary on a quest for answers after suffering a brutal defeat at the hands of the mysterious Ashen Demon. Join Edelgard, Dimitri, Claude and other Fire Emblem: Three Houses characters and lead your companions in real-time battles that blend the strategy of the Fire Emblem series with action-packed Warriors-style gameplay.

Take command of the battlefield and use tactical know-how to gain the upper hand. Employ flashy combos and powerful special abilities against hordes of enemies from the beginning of the game through the first three chapters! The demo will also support local two-player co-op play so you can flex your arms alongside a friend. Plus, you can carry your progress over to the full game when it launches.