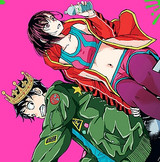 Netflix is continuing its Geeked Week special event and the latest announcement is sure to draw in fans of the hit manga authored by Haro Aso and illustrated by Kotaro Takata in ZOM100: Bucket List Of The Dead. Netflix has announced a live-action film adaptation of the manga first published in 2018, with actor Eiji Akaso in the lead role of manga protagonist Akira Tendo.

need more undead in your life? ZOM 100: BUCKET LIST OF THE DEAD is a zombie movie about a young man whose dull life is invigorated when a zombie apocalypse hits his town #GeekedWeek pic.twitter.com/P0sSwcKF3i

Eiji Akaso stars as Akira, the man trying to survive the hordes of the undead that have overrun his town #GeekedWeek pic.twitter.com/Kb56Yod5QA

In a trash-filled apartment, 24-year-old Akira Tendo watches a zombie movie with lifeless, envious eyes. After spending three hard years at an exploitative corporation in Japan, his spirit is broken. He can’t even muster the courage to confess his feelings to his beautiful co-worker Ohtori. Then one morning, he stumbles upon his landlord eating lunch—which happens to be another tenant! The whole city’s swarming with zombies, and even though he’s running for his life, Akira has never felt more alive!