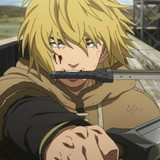 It’s been a while since we heard from the Vinland Saga anime, which has a second season in the works to adapt more of Makoto Yukimura’s manga. That’s about to change soon, though, because the official Twitter account revealed that “The Big Announcement” is set to be made via YouTube this Wednesday.

Director Shuhei Yabuta confirmed that the same staff as season one are working on the new season:

The same staff as season one are working on, with a deeper understanding of the title.

Shuhei Yabuta will be returning to the series as director, with Takahiko Abiru also returning as the character designer. The production studio for Vinland Saga season 2 hasn’t been confirmed as of yet, nor has a release date.