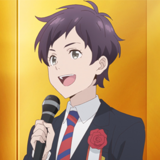 Sony Music and Milan Records will be releasing the soundtrack for this season’s Fanfare of Adolescence on June 8th, and ahead of the drop date, they were kind enough to let us premiere two of the songs! Take a listen to the songs “Fanfare of Adolescence” and “RUSH” below, accompanied by commentary from the composer, Hiroyuki Sawano, the giant behind the music of Kill la Kill, Attack on Titan, and more!

“This song was created as the main theme for Fanfare of Adolescence. The melody and sound were created to encourage the positive feelings of the main characters, based on an orchestra and band composition. I also created a vocal version of ‘Roads to Ride’ based on this song.” — Hiroyuki Sawano

“This vocal piece was created for a horse race scene, with the participation of Benjamin&mpi as vocalists. I wanted to create a sound that would make the images more dynamic, such as the momentum and speed of the race, and separate it from the words ‘freshness’ and ‘youth.'” — Hiroyuki Sawano

Be sure to check out the soundtrack release once it comes out, and we hope you enjoyed listening to some of the amazing music provided to us from Hiroyuki Sawano!