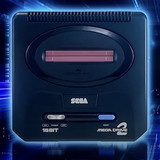 SEGA’s livestream came through with a new announcement as promised, and it looks like speculators were right on the money about the results. The company revealed its latest micro-console as a followup to the SEGA Genesis / Mega Drive Mini, with the Mega Drive Mini 2 currently set for an October 27 launch in Japan.

The second SEGA micro-console will throw SEGA CD games into the mix for the first time for a combo of cartridge and disc-based offerings. Check out the exuberant announcement and lineup trailers below, and read on for the full list.

So far, 11 titles have been revealed out of a total of more than 50 to be included.