Jump+ Manga Otodokemono Gets Tales of the Unusual TV Segment 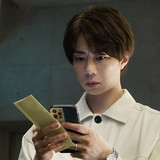 It’s going to be a spooky summer, because Otodokemono (“Delivery Service”), a one-shot supernatural suspense manga by Okusutsuneharu about a couple that gets more than they bargain for when they become dependent on a mysterious smartphone delivery app, is being adapted into a live-action film segment that will air on Fuji TV as part of the Tales of the Unusual Summer `22 Special Edition TV program.

The original Otodokemono manga is published on Shueisha’s Jump+ digital manga service, and it won 2nd place in the “Strange Manga Award” competition hosted by Shueisha and Tales of the Unusual in September of 2021. The story follows Takuya Yamanabe, a web designer, and Yukari Yamanabe, a nurse, as they grow increasingly dependent on a strange smart phone app that promises to deliver anything within a matter of mere moments.

RELATED: Tales of the Unusual TV Drama Gets Spooky with Haunted DQII Story

The cast for Otodokemono includes:

The Otodokemono segment is written by Yahito Araki and directed by Masato Fuchigami. It will broadcast on the Fuji TV network as part of the Tales of the Unusual Summer `22 Special Edition TV program, which runs from 21:00 – 23:10 on Saturday, June 18, 2022.

Jump+ Manga Otodokemono Gets Tales of the Unusual TV Segment