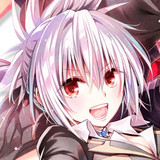 Following the initial announcement last December, the official website for the forthcoming TV anime adaptation of Kentaro Yabuki’s (To Love Ru illustrator) romantic comedy manga Ayakashi Triangle confirmed today that it is set to premiere in 2023. Main staff and voice cast members will be announced later.

The manga was first serialized in Shueisha’s Weekly Shonen Jump from its 28th issue of 2020 to its 20th issue of 2022, then has moved to the publisher’s manga app/website Shonen Jump + since April 2022. It has released nine tankobon volumes in JApan so far and has printed over one million copies. Its English edition‘s publisher Viz Media describes the series as below:

Teenage exorcist ninja Matsuri has his hands full protecting his town from harmful ayakashi. But all that exorcising has hardened his heart to the playful and helpless ones. Enter Suzu, Matsuri’s childhood friend who has a crush on him, and who calls ayakashi her friends. But one day, when Suzu is attacked by a powerful ayakashi, Matsuri ends up magically transformed into a girl! The jutsu is permanent, so now he has two challenges—defeat the growing number of ayakashi targeting Suzu and learn how to live as a girl! Is he man, or woman, enough for the task?