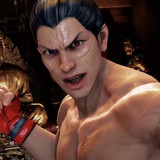 SEGA and Ryu ga Gotoku Studio announced plans to release the previously revealed Tekken 7 Collaboration Pack in Virtua Fighter 5: Ultimate Showdown on June 1, and a new trailer arrived along with the news. Folks who pick this one up for the PlayStation 4 fighter can look forward to 19 costumes from Tekken 7, as well as 20 background music tracks, a pair of collaboration titles and a version of the Tekken 7 battle user interface remade just for this DLC.

Check out the new trailer in English and Japanese: