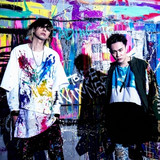 The official website for two-member unit OLDCODEX featuring vocalist Ta_2 (voice actor Tatsuhisa Suzuki) and painter YORKE announced today that they ends their activities on May 31, 2022. Their official website and Twitter will also be terminated as of August 31, 2022.

They have already announced that they would disband after the release of their last song “This fading blue,” which was featured as the theme song for the second part of the Free!: The Final Stroke anime film released in Japan on April 22, 2022. Their official fan club was already closed in March.

The site writes, “We would like to express our sincere appreciation to all of our fans who have warmly watched and supported our activities over the past 12 years, and to all of our stakeholders who have supported us,” and “We hope that you will continue to support our members as they move forward on their new paths.”

Ta_2 (Tatsuhisa Suzuki) says on the site, “No matter what I write, all I can say is thank you. Thank you so much for a wonderful time. I hope that everyone who reads this will find happiness in whatever form it takes for a long time to come, and that our work will remain somewhere in their hearts, even if only for a moment.”

And YORKE adds, “To the staff who kindly and strongly accepted me, a selfish and childlike person. Thank you very much. And to the fans, you have never let go of my hand at any time, and have watched over me to the very end. You, who are reading this, are my proudest fan in the world. Thank you for sharing that with me. I’ll never forget the moment we were able to dream together. “