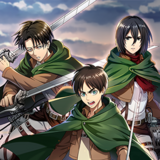 Following the announcement of the upcoming launch of Crunchyroll Games’ new release Bloodline: The Last Royal Vampire, Crunchyroll Games is also announcing the first collab event for the game featuring the series Attack on Titan!

The limited-time collaboration will bring the characters Eren, Mikasa and Levi into the world of Bloodline. Players will be able to collect the Attack on Titan characters along with other items for trade-in rewards, as well as complete collaboration missions. Themed dungeons will be available alongside pre-registration rewards, and extra bonuses for unlocking and using the Attack on Titan characters.

Check out the first announcement for Bloodline: The Last Royal Vampire right here, including the pre-registration bonuses! The game is described as such:

Bloodline: The Last Royal Vampire follows the Last Royal Vampire Lilo and her companion Ren in their quest to save their loved ones from a militaristic order called the Holy Land. Players build their own squad of warriors, heroes, and fantastical creatures to defeat exorcists, hunters, as well as vicious demons, and many powerful beings pulling the strings from the shadows. The anime-styled mobile role-playing card game features hundreds of characters and customization, allowing for a roster of heroes that is distinctly unique to each player.