TYPE-MOON’s Witch on the Holy Night Dated for PS4, Switch in Japan 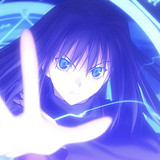 TYPE-MOON visual novel Witch on the Holy Night is making a comeback on PlayStation 4 and Nintendo Switch in Japan, and it now has a release date. Aniplex recently announced that the game will be available on December 8 in both a ¥6,600 (about US$52) standard edition and a ¥7,700 ($61) limited edition, with pre-orders now open.

For those considering an import, this version features language support for English, Japanese, Simplified Chinese and Traditional Chinese. The first-print limited edition packs the game in a special box—featuring art by Hirokazu Koyama—and a Fundamental Rhythms of a Witch art book. A digital version of theart book will also be included in the PS4’s Digital Deluxe Edition, priced at ¥7,150 ($56).

Check out the latest trailer for the HD, fully-voiced spin on the original 2012 visual novel:

TYPE-MOON’s Witch on the Holy Night Dated for PS4, Switch in Japan