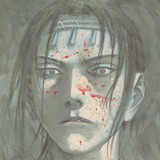 The cover has officially been revealed for the next deluxe omnibus collection of Hiroaki Samura’s Blade of the Immortal manga. Blade of the Immortal Deluxe Volume 8 hits stores on February 14, 2023, and you can prepare for the showdown between Manji and Shira with a first look at the front of the hardcover release.

Here’s what you’ll be staring down when the volume—which collects original volumes 23, 24 and 25—arrives early next year:

It’s time for the epic showdown fan have been waiting for—Manji against Shira!

Despite having lost one of his arms, Manji’s rapid healing abilities mean he’s still a formidable opponent, but the sadistic Shira has some incredibly depraved tricks up his sleeve. Manji will have his work cut out for him taking down his greatest foe. Meanwhile, Anotsu embarrasses the shogunate.

Blade of the Immortal has won numerous awards across the globe, including the Eisner Award in America, the prestigious Media Arts Award of Japan, and multiple British Eagle Awards—among many other international accolades. Samura’s manga epic was made into a complete anime series in 2008 and was adapted into a live-action film by Takashi Miike in 2017.

Collects Blade of the Immortal volumes 23 to 25 in the original 7″ x 10″ serialized format, in a faux-leather hardcover treatment, and with a bookmark ribbon.