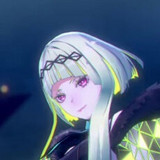 Ringo’s COMP weapon can switch between being a sword and a gun, with normal attacks utilizing the former and all-out Sabbath ones using the latter. Her elemental type seems to be Electric and she can learn different kinds of abilities, such as increasing the maximum number of skills she can hold. She also boasts a high attack stat and so she excels in the front lines.

Figue, on the other hand, doesn’t participate directly in battle. She acts as a support unit for the party. Her owl-shaped drone, Mimi, can perform reconnaissance and provide information about enemy encounter levels and if there are any friendly demons in the area. Players can also control Mimi directly in some locations, such as inside of an air duct. These paths are ones Ringo can’t reach so it’s up to Mimi to explore them.