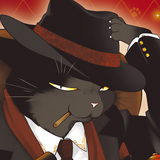 The Masterful Cat Is Depressed Again Today, Hitsuzi Yamada‘s slice-of-life comedy manga series, announced today that it will be getting the anime treatment next year. The series debuted on the Nico Nico Seiga web manga platform in 2018, in Kodansha’s Suiyōbi no Sirius section. Since October of last year, it’s also been running in Kodansha’s Monthly Shōnen Sirius magazine.

The announcement appeared on the cover of the latest Monthly Shōnen Sirius. Check out the cheerful Twitter announcement:

That’s all the intel that’s been released for now. Further info like staff, cast, and production studio will follow, with the anime itself premiering sometime in 2023.

The Masterful Cat Is Depressed Again Today is distributed in North America by Seven Seas Entertainment, who summarize it thus:

Saku is an ordinary young woman who works long hours and lives alone with her cat, Yukichi. Yukichi, however, is not an ordinary house cat. For one, the temperamental feline towers over Saku and walks around on two legs. Instead of playing with toy mice, he scours supermarket flyers for good deals and keeps the house spotless. With a pet like that, it’s hard to tell who’s taking care of who!

Volume 6 of the manga comes out in Japan on June 9, with a tie-in recipe book coming out on the same day.