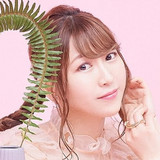 The official website for voice actress/singer Kiyono Yasuno has announced that a special program to celebrate her solo artist debut’s fifth anniversary will be live-streamed on her official YouTube channel from 20:00 (JST) / 04:00 (PT) on May 25, 2022.

While playing many popular anime chracters, such as Megumi Kato in Saekano: How to Raise a Boring Girlfriend, Sakura Kitaouji in Aikatsu!, Natsuki Kimura in The [email protected] Cinderella Girls, Kaname Buccaneer in Macross Delta, and Elena Amamiya / Cure Soleil in Star☆Twinkle PreCure, she made her solo artist debut with her first mini-album “Namida.” in July 2017. Since then, she has released four singles and three mini-albums.

Her manager says on Twitter that she has an “important and exciting” announcement in this special program. Don’t miss it!