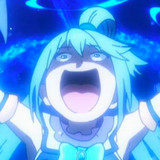 It has been nearly a year since we’ve heard a peep out of the KONOSUBA -God’s blessing on this wonderful world! franchise, but all of that will change on May 28 in a live stream for the series, the official Twitter account for the franchise announced tonight. The stream, embedded below and titled “KONOSUBA Channel New Information Reveal Quest Special” starts at 8 PM on the KADOKAWAanime YouTube channel.

The new information about the KONOSUBA franchise will be revealed when the live streamed quest, undertaken by the party members of Jun Fukushima (Kazuma), Sora Amamiya (Aqua), Rie Takahashi (Megumin) and Ai Kayano (Darkness), is completed. You might want to get a snack or ten prepared, cause it may take a while. That’s if they finish the quest at all.

What’s more, in the following Tweet, the KONOSUBA account confirms that separate from the first big information reveal, more details on the KonoSuba: Fantastic Days smartphone game will be announced.

After a traffic accident, Kazuma Sato’s disappointingly brief life was supposed to be over, but he wakes up to see a beautiful girl before him. She claims to be a goddess, Aqua, and asks if he would like to go to another world and bring only one thing with him. Kazuma decides to bring the goddess herself, and they are transported to a fantasy world filled with adventure, ruled by a demon king. Now Kazuma only wants to live in peace, but Aqua wants to solve many of this world’s problems, and the demon king will only turn a blind eye for so long…