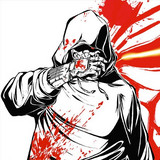 Venerable programming block Adult Swim has announced the addition of two new anime series that will join the schedule in the future, with the Rick and Morty anime shorts previously directed by Tower Of God director Takashi Sano leading into a 10 episode spin-off anime titled Rick and Morty: The Anime, which will be produced by Telecom Animation Film. Adult Swim and Sano are also stressing that the series will stand alone from the main series, playing up the multiverse aspect that is on trend for TV and film.

In addition to the spin-off, Adult Swim has also commissioned a new anime series from JUJUTSU KAISEN 0 director Sunghoo Park which will feature character designs by Takeshi Okazaki of Afro Samurai fame, and will be produced by E&H Production and Sola Entertainment in Ninja Kamui. Adult Swim describes the series:

Ninja Kamui follows Joe Higan who is a Nukenin – a former ninja who escaped his clan and is hiding from his violent past in rural America with his family. One night, he is ambushed by a team of assassins from his former organization who exact a bloody retribution on Joe and his family for betraying their ancient code. Rising from his seeming “death,” Joe will re-emerge as his former self – Ninja Kamui – to avenge his family and friends. Kamui is a 21st century ninja, a shadowy anachronism who pits his ancient skills against high-tech weaponry with brutal finesse. He must face off against trained assassins, combat cyborgs, and rival ninjas to bring down the very clan that made him.