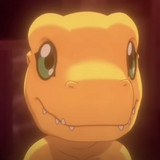 The delayed Digimon Survive game finally got a release date last month, and now we have some fresh gameplay footage out of Korean event Rulicon 2022. Producer Kazumasa Habu was once again on hand to set up the new preview, which shows Agumon digivolving into Greymon in the middle of a battle against Dokugumon.

Check out the latest look ahead of launch below.

Digimon Survive hits PlayStation 4, Xbox One, Nintendo Switch and PC in Japan on July 28, followed by a global launch on July 29.