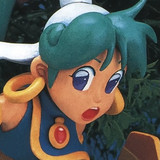 Check out a new trailer while we wait:

Here’s an overview of all four games:

Help Boy to rescue his girlfriend Tina, who got captured by the evil King. Guide him carefully through different areas and battle the devious enemies that await you on your quest. Use a variety of items that help Boy on his adventure. Face the evil King in various battles to reach your aim and rescue Tina!

Years after the adventures of Wonder Boy the beautiful peace in Wonder Land was destroyed once again by the invasion of a dragon with its evil monsters turning Wonder Land into Monster Land. Help Book to fight the monsters, defeat the dragon and restore the peace for the land and its people again. On your journey, you can collect equipment and magical spells to help you in your battles. But beware – every round has a time limit so you got to be quick!

Guide the young adventurous Shion and help him on his quest to defeat the evil BioMeka and his army of monsters that are threatening the land. However, Shion is not alone! Accompanied by the 4 spirits Priscilla, Hotta, Shabo and Lotta, he explores the different regions of Monster Land. Collect money, weapons, armor and magic spells to get stronger and defeat the evil!

The young girl named Asha sets out on her mission to save the four spirits that were captured by the evil wizards. With the help of Asha’s loyal companion Pepelogoo, they overcome every obstacle and fight their way through various enemies!