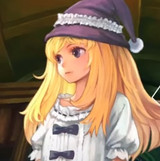 In addition to protagonist Lillet Blan, voiced by Iori Saeki, there are plenty of characters to get to know in GrimGrimoire OnceMore, which remasters Vanillaware’s 2007 real-time strategy game. Those characters are on display in the latest trailer from Nippon Ichi Software, so you can see more of how this one is shaping up ahead of its July 28 Japanese launch.

Meet the many colorful characters and find out who’s voicing who below.

A new magic school student, Lillet Blan enters a prestigious magic school at the Silver Star Tower. She has a big dream of becoming a great magician whom her little brothers would look up to. After her first five days at the school, she finds herself being trapped in loops of time; everybody except her was gone, then, she is brought back to the first day of school by this wicked time trap. Now, she must solve the mystery with the help of elves, fairies, and other familiars before it’s too late.