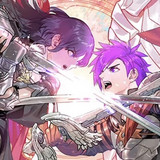 A new trailer is here for Fire Emblem Warriors: Three Hopes, which offers up different paths a la Fire Emblem: Three Houses when it hits Nintendo Switch on June 24. In the latest preview you’ll meet Dimitri and his allies from the Holy Kingdom of Faerghus along with other characters that will shape your destiny.

Check out the new trailer in English and Japanese while we wait for next month’s launch: