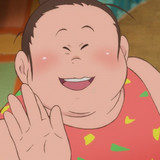 Film distributor GKIDS has announced a unique double feature for the beginning of June that will see the company pair the Fortune Favors Lady Nikuko feature film from last year with the Deiji Meets Girl series of shorts presented as a compilation.

The double feature will have its premiere on Thursday, June 2 in select US theaters with ticket presales available now in select theaters. Fortune Favors Lady Nikuko will then premiere in wider release starting on Friday, June 3 without the Deiji Meets Girl double feature.

Brash single mother Nikuko is well-known for her bold spirit, much to the embarrassment of Kikuko, her pensive yet imaginative daughter. In contrast to her mother, Kikuko wants nothing more than to fit in as she navigates the everyday social dramas of middle school. Life in the harbor is peaceful until a shocking revelation from the past threatens to uproot the pair’s tender relationship.

Maise is stuck spending the summer after her first-year of high school helping out at her family’s hotel in the sleepy seaside town, but things become a little less sleepy once Ichiro, a mysterious young man, checks into the hotel. It seems as if only Maise and Ichiro can see the strange, sudden apparitions: the hotel lobby and the room transforming into an aquarium, a giant tree erupting from the floor or the rowdy monsters laying claim to the hotel restaurant. Maise vows to figure out not just what’s causing these odd occurrences but why Ichiro has come to this remote town in the first place.