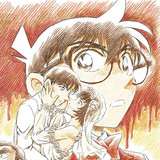 Not even the hero with a mustache from the MCU franchise could stop the momentum. Detective Conan: The Bride of Halloween earned 397 million yen (3.04 million USD) on 279,000 admissions in its fourth weekend of May 7-8, staying on the No.1 spot for four consecutive weekends and beating Doctor Strange in the Multiverse of Madness, which made its second place debut in Japan.

Unlike Spider-Man, Doctor Strange is not a well-known character in Japan, and this second film’s first Saturday and Sunday box office gross was also 13 percent below that of the first film, which was released in Japan in January 2017.

In 24 days since its release, the current total box office gross of The Bride of Halloween has reached 6.9 billion yen (53 million USD) on five million admissions, which was 92 percent of the four-week gross of the anime franchise’s 23rd and top-grossing film, The Fist of Blue Sapphire (2019), and 117 percent of that of the previous 24th film, The Scarlet Bullet (2021). Now it has become the fourth top-grossing film in the franchise by surpassing the 21st film The Crimson Love Letter (6.89 billion yen / 2017).

The second part of Free! the Final Stroke, the two-part final chapter of Kyoto Animation’s Free! anime franchise, dropped one position to eighth in its third weekend. The live-action film adaptation of CLAMP’s dark fantasy manga xxxHOLiC ranked ninth in its second weekend, which was a huge four place down from its debut weekend.

Doraemon: Nobita’s Little Star Wars 2021, the 41st feature film in the Doraemon anime franchise, ranked tenth in its tenth weekend. It has earned 2.6 billion yen (20 million USD) on 2.14 million admissions to become the 17th top-grossing film in the franchise by surpassing Nobita and the New Steel Troops—Winged Angels (2.46 billion yen / 2011).

RELATED: Japan Box Office: Detective Conan: The Bride of Halloween Stays at No.1 for 3 Consecutive Weeks