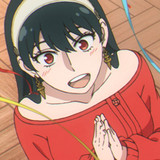 With the SPY x FAMILY TV anime currently airing every week, the world is currently in the midst of Anya and Forger family frenzy with Japan leading the pack (as usual with anime and manga, of course). The editor of Tatsuya Endo‘s manga, Shihei Lin, revealed on Saturday the updated numbers for the manga, showing just how much the series has grown, detailing its readership on the Japanese Shonen Jump+ digital platform and release numbers for the collected volumes.

Rin announced that SPY x FAMILY has had over 350 million reads on the Shonen Jump+ digital platform, with over 17 million copies of the collected volumes printed (physically) and sold (digitally). These stats are just from the first month since the anime premiered, so looking at historical trends, it’s likely that this number will explode as more episodes come out over its two separate parts.

SPY x FAMILY is the first series serialized on the digital Shonen Jump+ platform to hit the 10 million copies milestone since the platform opened, and is released in Japan every two weeks. The anime adaptation directed by Kazuhiro Furuhashi at both WIT Studio and Cloverworks streams on Crunchyroll every Saturday, who describes the series as such: