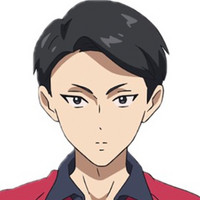 As the inter-high badminton tournament gets underway in the latest episodes of the Love All Play TV anime adaptation of Asami Koseki‘s novel series, the boys from Yokohama Minato High School meet the team from Saitama Futaba Academy, five-time championship winners. Two cast members from Saitama Futaba Academy were revealed after today’s alongside their character art.

Love All Play is directed by Hiroshi Takeuchi (Blade & Soul) and streams every Saturday right here on Crunchyroll after its Japanese broadcast. Crunchyroll describes the series as such:

The protagonist, Ryo Mizushima, enters a junior high school and joins the badminton club on the spur of the moment. Although there are no proper instructors at the school, Ryo’s physical strength allows him to improve to the point where he is able to participate in the prefectural tournament. Then Ryo is approached by Ebihara, the famous coach of the prestigious Yokohama Minato High School badminton club. Ryo, who is indecisive and humble, hesitates to go to the school, but his older sister, Rika, who is the top student in her third year there, gives him a strong push and he decides to go. Blessed with a coach and teammates at high school, Ryo gains the experience he’s been lacking and aims to win the Inter-High School Championship!