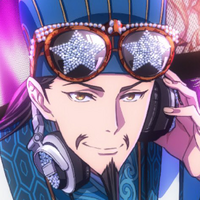 First up is “Shooting Star”, which was featured in Episode 2:

Second is “Be Crazy For Me”, which was featured in Episode 3:

The full original soundtrack is currently scheduled for release on June 29.

Based on the manga by Yuto Yotsuba and Ryo Ogawa, Ya Boy Kongming! is directed by Osamu Honma (APPARE-RANMAN! episode director) at studio P.A. Works, with series composition by Yoko Yonaiyama (Umamusume: Pretty Derby scriptwriter) and character designs by Kanami Sekiguchi (SHIROBAKO).

Sentai Filmworks, who is simulcasting the anime on HIDIVE, describes the series as:

The music industry becomes a battlefield when ancient strategist Kongming is transported to modern Japan. He’ll use military tactics to turn his new friend Eiko into a music star, and together they’ll take the party hotspot of Shibuya by storm!