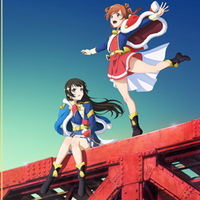 Sentai Filmworks has announced plans to screen the Revue Starlight feature film adaptation, Revue Starlight The Movie in select US theaters later this Summer following a planned premiere during the Anime Central convention being held next month in the Chicago suburb of Rosemont, Illinois. Sentai describes the film:

Revue Starlight The Movie picks up soon after the series left off and opens the curtain a new, original story set during Karen Aijo and Hikari Kagura’s third year at Seisho Music Academy, a performing arts school for young women who aspire to the heights of on-stage stardom. In the next chapter of their theatrical lives, these young women will face one another on the battlefield of the stage, where song, dance and thrilling swordplay collide to illustrate the rich emotional narratives of the film’s protagonists. Fans of Revue Starlight won’t want to miss the next chapter of Karen and Hikari’s story, which brings to life even more of the high-flying musical numbers and rich emotionality of the beloved original series.

The list of currently scheduled theaters is below, and Sentai has also opened a request form to request a film screening in a specific location, with the film’s limited engagement running on June 5 and 6, 2022.

Sentai Filmworks has also released a trailer for the screenings, embedded below: