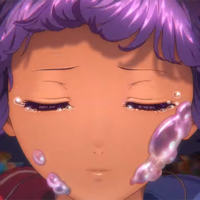 Soon, the gravity-defying new anime film Bubble will be taking us on a journey through a ruined Tokyo. Before that, though, Warner Bros. Japan has released a new trailer, highlighting the ucpoming film’s theme song.

Titled “Bubble feat. Uta,” the song hails from singer/songwriter Eve. The musician has penned Vocaloid tunes, as well as music featuring in Dororo, JUJUTSU KAISEN, and Josee, the Tiger and the Fish.

Check out the latest trailer:

A special page has been set up for the OP theme single, including a promotion for users of LINE MUSIC. Subscribers who listen to the tune between April 21 and May 19 via the streaming app, then send in a screenshot of their LINE MUSIC Top 50 showing how many times they’ve listened, will be eligible for a prize drawing. 20 entrants will get a Bubble pouch autographed by Eve, and one grand prize winner will receive a costume from Eve’s live 2022 tour.

Bubble will be streamed on Netflix worldwide on April 28, then will be released in Japanese theaters on May 13. Netflix describes the film’s synopsis as below:

The story is set in Tokyo, after bubbles that broke the laws of gravity rained down upon the world. Cut off from the outside world, Tokyo has become a playground for a group of young people who have lost their families, acting as a battlefield for parkour team battles as they leap from building to building. Hibiki, a young ace known for his dangerous play style, makes a reckless move one day and plummets into the gravity-bending sea. His life is saved by Uta, a girl with mysterious powers. The pair then hear a unique sound audible only to them. Why did Uta appear before Hibiki? Their encounter leads to a revelation that will change the world.