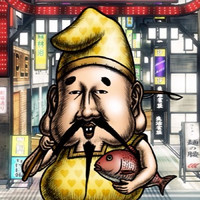 Being an auspicious deity is not all it’s cracked up to be in Nanaraki ~Seven Lucky Gods~, a newly announced short form web anime that depicts what would happen if the Shichifuujin, the Seven Gods of Fortune, were to end up as a bunch of freeloaders in the mortal realm.

The main staff for the series includes:

RELATED: Ninjala TV Anime To Premiere In English On YouTube