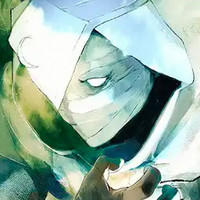 The dark worlds of Tokyo Ghoul and Moon Knight combine in a brand new illustration (above) of the two lead characters drawn by Tokyo Ghoul manga creator Sui Ishida. The collaboration is in celebration of Marvel Studio’s Moon Knight weekly streaming release on Disney+ around the world and Ishida’s excitement for the series.

Ishida said that he was “looking forward” to the Moon Knight series as the “dark world, beautiful images, and ideas of ‘sleep disorder’ and ‘insanity’ really attracted” him to the character. His first introduction to the Marvel culture was through the Marvel vs. Capcom fighting game when Ishida and his friends used to play together.

After watching the first few episodes, Ishida claimed that “I think I may like [Moon Knight] the most out of all the Marvel heroes.” Continuing on, “I could feel the dark charm of the world filled with fast action scenes and rough violent scenes that make it hard to call [Moon Knight] a hero. I also liked the comical and sorrowful personality of the main character, Steven.”

Moon Knight streams on Disney+ around the world every Wednesday. The anime adaptation of Sui Ishida‘s Tokyo Ghoul manga is streaming here on Crunchyroll.