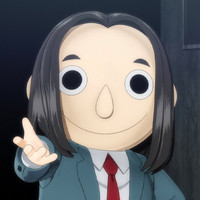 Games are afoot in the latest episodes of thriller TV anime Tomodachi Game (just like every episode!), based on the manga of the same name written by Mikoto Yamaguchi and illustrated by Yuki Sato, and to join in on the fun, the voice of Manabu-sensei has been confirmed alongside the release of the creditless version of the ending theme song, which features the sounds of saji performing “Tomoshibi.”

Chafurin, who is best known as the voice of Kuraudo Oishi in the Higurashi franchise, will be joining the cast of Tomodachi Game as the mysterious Manabu-sensei.

Tomodachi Game is directed by Hirofumi Ogura and features animation production at Okuruto Noboru. The series is currently broadcasting in Japan, with Crunchyroll streaming it as part of the spring 2022 season. Crunchyroll describes it as such:

However, after a particular incident, they’re dragged into a debt repayment game.

The only way to beat the “Tomodachi Game” is to not doubt their friends. Bound together by solid friendships, the game should’ve been easy, but– The hugely popular comic that sold over two million copies is finally becoming an anime! Will they trust or betray their precious friends? The true nature of humanity is exposed in the ultimate psychological game!