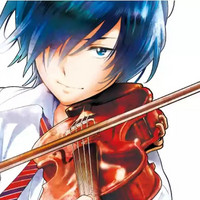 The author of the Ao No Orchestra manga, Makoto Akui has confirmed on her Twitter account that the currently ongoing manga will receive an anime adaptation and has drawn a celebratory illustration to celebrate the milestone, embedded below:

The manga is currently serialized across Shogakukan’s Ura Sunday and Manga One online platforms, with 9 collected volumes so far, and the 10th volume slated for release next Tuesday in Japan.

The manga is about high school student Hajime Aono who grew up a violin prodigy that won numerous awards and dominated most of the competitions he participated in. Despite this, he gave up on the violin during his second year of middle school.  One day, he meets Ritsuko Akine. Akine inspires him to take up the violin again, deciding to go to a high school with a famous orchestra club. With the help of Akine and his new clubmates, he learns to love the violin again.

More details on the adaptation are expected in the future.