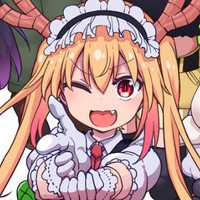 If you were hoping to try your bullet hell luck with the Miss Kobayashi’s Dragon Maid shoot ’em up, you can shelve those import plans. Aksys Games announced plans to release Miss Kobayashi’s Dragon Maid: Burst Forth!! Choro-gon☆ Breath on PlayStation 4 and Nintendo Switch in North America this summer, so get your practice in wherever you can so you can master this vertically-scrolling shmup when it launches.

Miss Kobayashi’s Dragon Maid: Burst Forth!! Choro-gon☆ Breath features a fully-voiced original story, the ability to collect over 30 mini-dramas illustrated by creator Coolkyousinnjya and other popular illustrators, and more. Five endings are also waiting to be unlocked depending on how high your final score is.

The game is developed by Kaminari Games and recently launched in Japan via Bushiroad on March 24.

While we wait for more details on the English release, you can catch up with the Miss Kobayashi’s Dragon Maid anime on Crunchyroll, which describes the series like so:

Miss Kobayashi is your average office worker who lives a boring life, alone in her small apartment–until she saves the life of a female dragon in distress. The dragon, named Tohru, has the ability to magically transform into an adorable human girl (albeit with horns and a long tail!), who will do anything to pay off her debt of gratitude, whether Miss Kobayashi likes it or not. With a very persistent and amorous dragon as a roommate, nothing comes easy, and Miss Kobayashi’s normal life is about to go off the deep end!