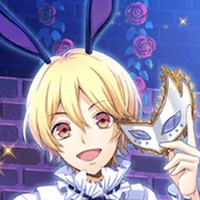 We’d have taken this one for an April Fools’ prank, but then again… we know TsukiPro. And if there’s one thing this media mix project does well, it’s go all in on its crazy AUs. Thus, RABBITS KINGDOM: The Movie.

RABBITS KINGDOM was originally a special event for the project, in which members of in-universe idol groups Six Gravity and Procellarum stumble across a fantasy book by this title. The story stars the cast, but as fantasy-world rabbit boy versions of themselves. The themed event was so popular, it became the basis for the fifth TsukiSta. stage musical.

2023 marks both the tenth anniversary of the TSUKINO project as a whole, as well as the next Year of the Rabbit, making RABBITS KINGDOM a surprisingly apt choice for a celebratory film.

This isn’t the first time we’ve gotten an adaptation like this, either. The 2017 TSUKINO HYAKKIYAKOU event, which depicted the series’s idols as various yokai, inspired both stage plays and a story arc in the second season of TSUKIPRO the ANIMATION.