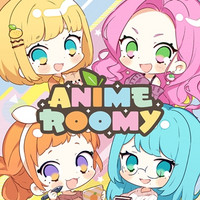 The podcast is hosted by four girls Mikan, Yuzu, Yuri, and Sakura, who are members of the World Otafy Project by PONYCANYON USA. They provide various information about anime, from well-known classics to the latest works, and talk about their favorite things, not limited to anime, such as their “favorite Japanese words” with the concept of “a fun chat between roommates.”

The concept of “Anime Roomy” s described as below:

Nippon Broadcasting System and PONYCANYON USA INC. team up to bring you a podcast starring a group of real-life anime lovers. Come meet the Roomies, a group of kawaii otaku girls based in the USA, as they talk about anime and Japanese culture in corners like “Oshikai”, “Funny Japanese Phrases in Anime,” and many more, with a rainbow of topics packed into each week’s episode!

????The First Episode Has Been Released????
The “Roomies” talking about their love of Japanese anime and how they became an otaku????
Check it out on streaming platforms and YouTube!https://t.co/vrsk56huOr#AnimeRoomy