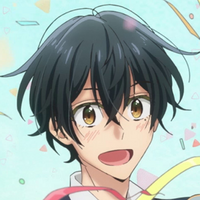 The title boys of Sasaki and Miyano, this season’s “boys’ life” series, will be back again, according to an announcement just dropped on the anime’s official Twitter.

The post thanks viewers for their support, and says a “new anime” is in production. “Sasaki and Miyano’s youth goes on,” the announcement adds, with promises of more news to come.

The series, which was streamed this season by Funimation, has just closed out its first season. A combination of boys’ love and slice-of-life, the series is known as Sasaki to Miyano in Japan and alternately referred to as SasaMiya. The official summary from Funimation:

Miyano spends his days reading Boys’ Love manga and worrying about the soft features of his face. His world of fiction becomes reality when a chance encounter leads him to high school senior Sasaki in the middle of a fight. Now, Sasaki wants to spend every opportunity he can to get to know Miyano. And what was once admiration quickly turns into affection.

More news on the further adventures of Sasaki and Miyano will be coming soon.

Crunchyroll is part of Funimation Global Group, a joint venture between Sony Pictures Entertainment and Aniplex.