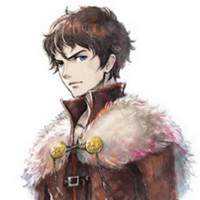 In the wake of Triangle Strategy’s release earlier this month on March 4th, Nintendo of Europe’s Twitter account has been featuring different aspects of the unique strategy game’s style, and their latest tweet focuses on character designer Naoki Ikushima‘s incredible painting of main protagonists Serenoa and Frederica, shot as a timelapse. Ikushima’s comments also reflect the intensity of the game’s storyline. Triangle Strategy is available on Nintendo Switch.

Serenoa and Frederica will have to make difficult decisions in #TRIANGLESTRATEGY, available now on #NintendoSwitch.

“I would like to give them time to catch a gentle light, even for a little…” Designer Naoki Ikushima depicts the characters before they face their stormy fate. pic.twitter.com/8dIpoW9y2m