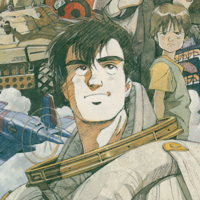 Exactly 35 years ago today, March 14, 1987, Gainax and Bandai’s first original anime feature film Royal Space Force: The Wings of Honnêamise was released in Japan. The film was written/directed by Hiroyuki Yamaga and created by many other top creators, including Hideaki Anno, Yoshiyuki Sadamoto , and Shinji Higuchi, with music by the oscar-winning composer Ryuichi Sakamoto.

To celebrate its 35th anniversary, the film will get the 4K-remaster treatment. Under the supervision of director Hiroyuki Yamaga, the film will be scanned in 4K from the 35mm original master positive film and remastered in 4K to vividly reproduce the information contained in the film. In addition, a revival screening of the 4K remastered version will be held in 2022 (using the original sound of the 1987 version).

There is a word: “impractical proposition.” It is a theory that we don’t know if it can be linked to reality, which is conceived only on the desk. Thirty-eight years ago, Toshio Okada-san and I were working on this.

All that was on the table at the coffee shop in front of Momoya Station in Ikuno Ward, Osaka City, where the two of us were sitting facing each other, was a hand towel, water, and coffee. There was not even a sheet of notepaper.

Can the logic spoken within the space of this coffee shop rival the weight of that world, which is like an endlessly flowing river, once you step out of the store?

Three years later, on March 14, 1987. It was the day when that impractical proposition was linked to this reality.